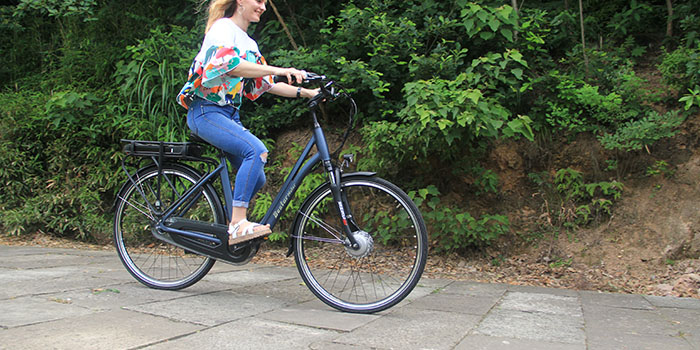 Same as non-electric bicycles, they are able to run to all kinds of places, including “places where cars can’t go to”, “places without buses”, “places where motor vehicles are forbidden”, “places where factories, mines, communities and schools that are not allowed cars to enter”. You can either ride them as normal bikes or pedal assist e-bikes freely. It is much more flexible and convenient.
Indeed, e-bikes are small in size, light in weight, and can easily cross streets. Especially in those developed cities where an inch of land is worth an inch of gold. E-bikes can be easily set in the basement of the floor or the designated parts of the community. So there is no need to occupy parking spaces nor much public space.

Ms. Ma lives in Zhuzhuang of Hailing and works in the central city. She used to drive every day, But a few days ago, she bought a new e-bike. It’s not only convenient to go to and off work, but also helps save?a lot of gas money. Mr. Wang, who lives in Jingguang community, also bought an electric bicycle for his junior high school son. “It’s a long way for him to walk?to school.?It’s fast and cheap to ride an e-bike,” Mr. Wang said.

It’s true that e-bikes don’t need to pay road maintenance fees,?while the price of an ordinary e-bike is only 1500?to 3500 yuan. Compared with motorcycle,?the cost of electricity is only one tenth of that of motorcycle oil. Is there anyone who doesn’t like cheap and affordable things?

E-bike also has a big advantage: Electric bikes will not produce exhaust gases?while riding.?So there is no traditional motorcycle?air pollution problem.?Some people say that the secondary energy used by electric vehicles, electricity, makes pollution?when it is produced by thermal power plants. It just transfers the pollution from city to suburbs. In fact, electric motorcycles do not simply change the air pollution?sections. Compared with traditional motorcycles, they do reduce the pollution. Because the power sources are diversified, many energy sources such as water energy, wind energy, solar energy, tidal energy and nuclear energy?can be efficiently converted into electric energy. Even if all the electric energy of electric bikes comes from thermal power plants, their overall energy utilization efficiency is higher than that of urban conventional motorcycles.?That is to say, the use of electric bikes can reduce the air pollution. In addition, if you avoid the peak night charging, it can further reduce the waste of energy.

For a 100 kilometer journey, a car usually needs 5-15 liters of gasoline, a motorcycle also needs.

If your?company is within 15 km away from where?you live, it’s very convenient to use the electric bicycle to go to and off?work . You can also ride it to the supermarket to purchase something and carry them back, it’s very easy.

Electric bikes are noise free or very light. People do not have the feeling of boredom while driving. Noise pollution has been the most serious one in city pollution. Therefore, it is beneficial for the development of the city and suitable for road to ride e-bikes effectively.

An electric bicycle can run 40 kilometers per charge.?And it’s convenient to charge: after using it during the day, you can take the battery home at night to charge. It¡¯s very convenient.?If your?electric car is out of power, you can also rely on manpower to ride back. It’s much more convenient than a car without gas.

Electric bicycle is easy to learn. It¡¯s light and slow (the speed can be controlled and limited within a reasonable range). As long as you know how to ride a bicycle, you can ride an electric bicycle. The only thing you need to pay attention to is that you should know the function of each buttons at the beginning.
For electric bicycle, according to the national regulations, the speed should be below 20 kilometers per hour.?So it’s very safe to ride.?Especially for mothers with babies, this advantage is more practical and safe.
These above are the summaries of the electric bicycle advantages. What do you think about it?

PrevPreviousDaily use and maintenance of lithium battery